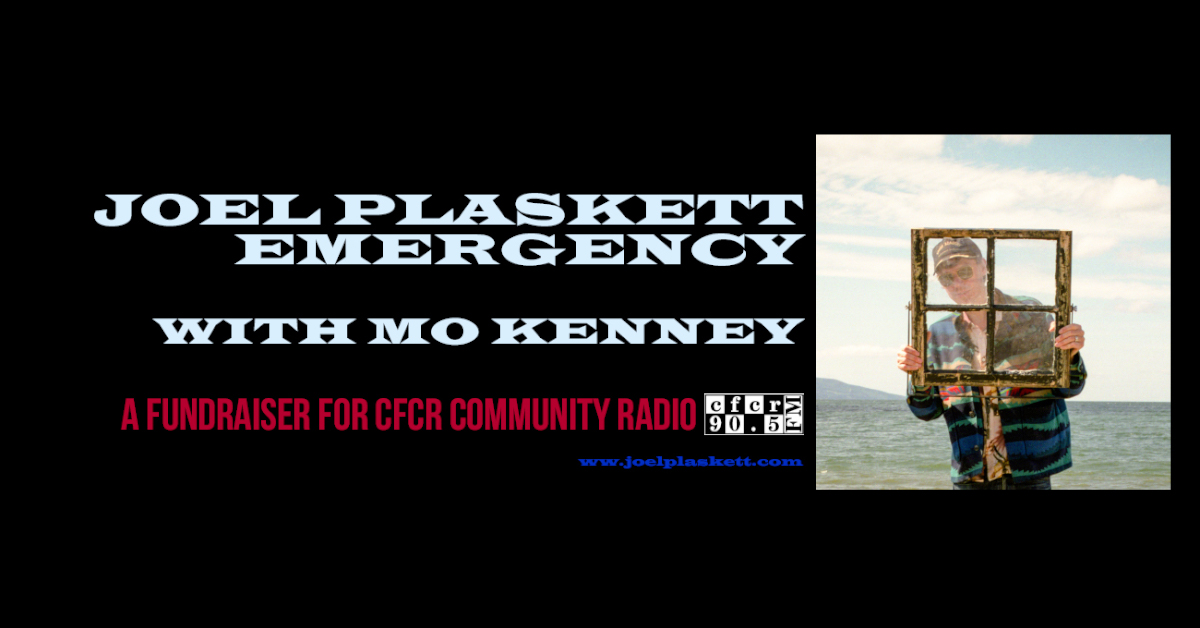 The Broadway Theatre is proud to partner with CFCR to present Joel Plaskett and Mo Kenney! All proceeds from this show will go towards CFCR, Saskatoon's only community radio station!

From rocking Halifax’s Marquee Club to performing for the masses at Massey Hall or touring the country with his father, Joel Plaskett has forged a reputation as one of Canada’s most engaging performers and respected singer-songwriters.
Plaskett’s songs are a perennial part of the national playlist, a fixture on “best of” lists, and the soundtrack to the lives of faithful fans across the country and around the world. His accolades over a quarter century include a Juno Award, numerous East Coast Music, Canadian Folk and Music Nova Scotia awards, and two Polaris short list nominations.
Plaskett’s new project, 44, is his most detailed musical weave yet. A sprawling box set comprised of four, 11-song albums connected visually and thematically, at its heart 44 is an imaginative rumination on trying to slow down and grow up in a rapidly accelerating world.
Plaskett began his musical career in the early 1990s as a member of alt-rock favourites Thrush Hermit, recruiting lifelong fans as the band toured North America in a half-size school bus, setting up their signature neon ROCK & ROLL sign from show to show.
In the early 2000s, Plaskett started touring under his own name with his band, The Emergency (featuring Dave Marsh on drums since 1999, and for the last 14 years, Chris Pennell on bass). Backed by the Emergency and racking up a growing roster of anthemic singalongs, Plaskett worked his way up from small clubs to opening for Paul McCartney and the Tragically Hip, and filling larger venues with his own devoted audience.
Plaskett is a versatile and ever-evolving artist, at turns delivering intimate and idiosyncratic singer-songwriter fare (In Need of Medical Attention, La De Da, The Park Avenue Sobriety Test); incendiary riff-rock (Down at the Khyber, Truthfully, Truthfully), left-leaning folk rock (Solidarity), as well as conceptual epics and off-kilter feats of musical stamina (Ashtray Rock, Three, Scrappy Happiness, 44).
Recorded to analog tape, Plaskett’s records reflect his attention to detail, his dedication to technique, musical history and craft, and a sincere and inimitable lyrical style that runs through his diverse and ever-expanding catalogue. In addition to producing most of his own records since 1999, Plaskett has also set up shop behind the console at his New Scotland Yard studio in downtown Dartmouth, N.S. His work with artists like Jimmy Rankin, Two Hours Traffic, David Myles, Sarah Slean, Shotgun Jimmie, Dennis Ellsworth, Old Man Luedecke, Dave Marsh, Colleen Brown and longtime collaborator Mo Kenney has led to numerous awards for production, and turned New Scotland Yard into a popular destination for artists looking to develop and document their sound.
In front of the studio is The New Scotland Yard Emporium, where Plaskett has partnered with Halifax mainstay Taz Records to bring a curated selection of records to his adopted hometown, providing a spot where music fans can congregate to grab a coffee or beer while they dig for records.
In a world increasingly connected—and disconnected — by digital mediums, Joel Plaskett prefers to make his connections the old-fashioned way, building community at his studio and shop, dedicating himself to the art and authenticity of songwriting and analog recording processes, and moving audiences with the electrifying, uplifting experience of live performance.
In all aspects of his work, Plaskett embraces both the communal and individual experiences music provides. The ways music and words combine to connect with the listener, turning a minute into a moment out of time, reminding us that we aren’t alone.

https://joelplaskett.com/
----------------------------------
Mo Kenney
Just like a mask—that so-called disguise which, in fact, often reveals something profound and otherwise secret about the individual who wears it—Mo’s upcoming release “Covers” offers a glimpse into the molecular musical composition of the artist interpreting them
Kenney’s willingness to unflinchingly pursue her artistic impulses on her own terms has resulted in numerous accolades over the past decade, including a 2013 SOCAN Songwriting Prize for her song “Sucker,” a nomination for the 2016 Adult Alternative Album of the Year JUNO for In My Dreams, and too many East Coast Music Awards and Nova Scotia Music Awards to count. And despite the uncertainty of live music in 2020, the year will find Kenney exploring new and innovative ways to connect with her fans.