This week, the world of radio, particularly campus/community radio lost a long-time ally in Mr. Gordon Einar Walburn, who passed away after a long illness on July 10th in Winnipeg. He was the long-time Station Manager at the University of Saskatchewan's former student radio station CJUS (later CHSK). Walburn was also a great source of advice and inspiration when the Community Radio Society of Saskatoon (CRSS) and later CFCR radio were being formed.

"I greatly admired and respected him, for he was a true gentleman," stated former CFCR Station Manager and CRSS founding member Ron Spizziri in an email. "I tried to emulate him whenever possible while serving as manager of CFCR. When we were forming the CRSS, Gord gave generously of his time and expertise and helped us with our CRTC application, as he truly wanted a community or campus radio station back on the air in Saskatoon." Spizziri first met Gord when he began hosting his program, Nightwaves, which is still a staple on CFCR's airwaves.

"For several years Gordon asked me to start a German program on CJUS," said Kirmse by email. "Finally, in 1977, Margret Asmuss, a student and daughter of German parents here on Saskatoon consented to start a program together with me. She took the course with Frank Harris at the station and in December of that year we aired our first program from the MUB. Gordon was the manager/director of this campus radio station.  For a very long time we had to tape our program. Gordon also was in contact with (Radio) Deutsche Welle in Köln, Germany, from where he received weekly tapes for our program."

Kirmse, along with Walburn and Harris also started a classical program at CJUS, which still exists today on CFCR in the form of The Classical Connection.

"When the University Radio station closed because of financial reasons Gordon gave many German cassettes, records and tapes," she said.

Walburn, along with his wife Ruth were generous supporters of CFCR, regularly donating to our FM-Phasis funding drive campaigns. 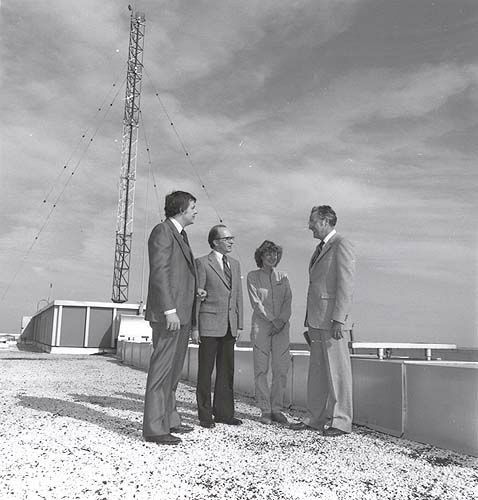 Official Opening of the new transmitter for CJUS-FM atop the Arts Building on the University of Saskatchewan campus. Pictured from left to right are Al Pippin, CJUS-FM technical director; Gordon Walburn, station manager; Joanne Bristol, student volunteer; and Cliff Wright, Mayor of Saskatoon.

Below is the obituary issued by the Neil Bardel Funeral Centre in Winnipeg:

Gordon was born and educated in Winnipeg where his fascination with radio began in early childhood. He knew then that when he grew up he wanted to "push buttons". A long and distinguished career in radio broadcasting would fulfill that desire. Following graduation from Daniel McIntyre Collegiate, Gordon was hired by CKRC in February of 1944 as a transcription clerk. He was also their record librarian and an announcer. Later he worked for stations in Kenora, ON and Brandon prior to leaving Winnipeg for Saskatoon, SK in May, 1951 to work as an announcer for a new station, CKOM, set to launch the following month.

Gordon returned to Winnipeg for his marriage to Ruth Badali on September 29 of that year and the couple then travelled by train to Saskatoon where they would remain as residents for almost sixty years. He was promoted to Production Manager of CKOM in August of 1952 but continued to be a popular and well-respected occasional on-air personality.

Always committed to providing listeners with quality community programming, Gordon began intensive preparations to present a brief to the Canadian Radio and Telecommunications Commission (CRTC) for a hearing in Ottawa in his bid to bring the first FM radio station to the province of Saskatchewan. He was granted the license and CFMC-FM went on the air in December 1964.

Gordon chose to sever his connection with this commercial venture to head up the University of Saskatchewan's fledgling student radio station CJUS-FM which began broadcasting on a limited frequency in December 1965. He trained students, guided and monitored programming, eventually oversaw a move to a larger facility on campus and succeeded in achieving a power increase in order to bring the station to a wider listening audience. Under his expert guidance, CJUS (changed to CHSK in 1983) became a "model for all other FM stations in Canada." (CRTC Commissioner Pat Pearce) Gordon accepted early retirement in 1985 when, sadly, in spite of its popularity, budget cuts at the University resulted in an end to its funding of their campus radio.

Gordon was always interested and involved in his community. He was active on the Parks Board, coordinating their outdoor summer band concerts for twenty years. He was also a member of the Board of Directors of the Saskatoon Symphony, served on other local boards and belonged to the Nutana Rotary Club. His civic contributions were acknowledged when he was awarded a Certificate of Distinguished Community Service by City Council. He also received recognition from the Canadian Association of Broadcasters when he was inducted into first the Quarter Century Club and then the Half Century Club.

People were always amazed by Gordon's vast knowledge and his incredible memory for details, whether for world history or that of the recording industry. A true radio pioneer, he was consulted over the years by journalists and other individuals compiling information on the history of broadcasting.

Gordon maintained a strong work ethic throughout his career, and was passionate about the correct use of the English language and its fascinating complexities. He shared his love of music and quirky humour with like-minded family and friends, and certainly passed his enjoyment of it to his daughters. He preferred listening to old classic selections from a variety of genres. For him, they would always stand the test of time.

We wish to express our appreciation for the quality care Gordon received at the Southeast Personal Care Home and the particular compassion demonstrated by staff members in the final weeks both to him and members of his immediate family.

Gordon will be sadly missed by all the members of his extended family and by close friends, but he will be remembered by many more people who still remember him from his years in broadcasting.