CFCR 90.5 FM Community Radio is a non-profit organization, owned by the Community Radio Society of Saskatoon. We are a volunteer-powered, listener-supported organization serving the alternative radio needs of Saskatoon and surrounding areas. As CFCR is a non-profit organization, our on-air hosts are primarily volunteers, but we do have a small, hardworking Staff, who keep the station running on a day-to-day basis. We work with the kind guidance of our Board of Directors.

CFCR is proud to offer listeners a wide array of programming, broadcasting for an average of about 20 hours of content per day, seven days per week. ​Programming continues to include an eclectic mix of non-commercial music of all genres, several locally-produced Spoken Word shows (Mon 6-7pm; Tues-Fri 6-7:30pm), and Multicultural Programs broadcast in several languages from around the world (Sat-Sun daytime). All this programming is driven by the goal of providing a "Voice to the Voiceless," which is one of the key mottos of CFCR.

We also feature programming to highlight local events such as the “Fringe Fest Flyer,” “Around The World in 800 Watts” (Folkfest coverage), and the Shakespeare on the Saskatchewan “Bardcast.” Our daily "New music, music news & interviews" program The Buzz brings in hundreds of guests per year, promoting various arts, culture and charity events and initiatives. Many musicians perform live-to-air on The Buzz, and we often record these performances and post the audio to our YouTube channel.

As a non-profit, non-campus organization, CFCR is primarily self-funded, employing three main avenues of funding: Donations and other Fundraising, Memberships, and Advertising Sales. We run a two-week Fundraising Drive called FM-Phasis each fall, as well as a Membership Drive in the spring. Funds raised go towards maintaining the station and its facilities (studio equipment, server/computer equipment, etc), as well as larger projects such as the CFCR website, digitization of the library and developing a public content archive (for on-demand streaming). 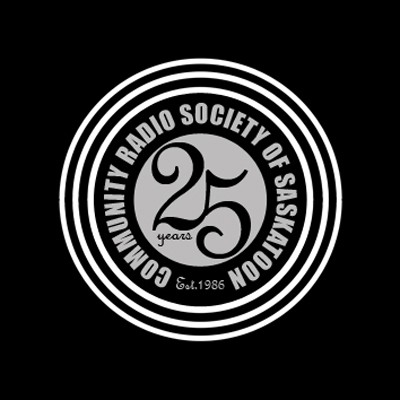 When the University of Saskatchewan’s campus radio station CHSK-FM (formerly CJUS) signed off the air in September of 1985, a small group of concerned individuals decided to form a Community Radio Station in Saskatoon.

Following the incorporation of the Community Radio Society of Saskatoon (CRSS) the following year, the founding members set out to convince the city that a non-profit, community-run station was a feasible concept.

After attracting an impressive number of members, many of whom were former CHSK on-air hosts, work was begun in earnest on creating a program schedule, training volunteers and arranging fundraising events.

It was at this time that a “White Knight” appeared in the form of Saskatoon Telecable, who offered the CRSS the opportunity to immediately begin broadcasting out of the Telecable studios on cable FM and the audio portion of channel 10, at no charge. This arrangement allowed the fledgling radio station to fine-tune its program schedule and provide on-air training to volunteers while preparing its license application with the CRTC. The CRSS then moved it its new home in the lower level of 103 3rd Avenue North in downtown Saskatoon. On July 14th, 1991 at 5:30pm, CFCR made its first test broadcast. The first album spun was A Proud Canadian by Stompin’ Tom Connors, followed shortly by the first complaint that there was too much Stompin’ Tom Connors being played. September 7th, 1991 at 3:19pm marked the official sign-on of CFCR as a full-powered FM radio station, broadcasting at 90.5FM. The first official program to air was Sounds of Scotland.

On March 22, 2006, we increased our output power to 1630 watts, greatly improving the signal and coverage for Saskatoon’s outer-lying areas.

In 2007, CFCR moved to its present location on the 3rd Floor of the beautiful heritage building at 267, 3rd Avenue South.  Then in 2008, we began broadcasting our live content online at CFCR.ca in addition to the FM broadcast.

Today, CFCR boasts a membership of over 600, with approximately 150-200 members also volunteering as on-air hosts.

What does being on our Board mean? Specifically, our Board members attend monthly meetings (currently over zoom). Broadly, The duties and responsibilities of the Board of Directors are: